For a filmmaker, with an independent film, the purpose of a Film Festival, other than social validation, is to demonstrate to distributors (assuming their Acquisition Executives are in attendance) that your film is (A) Marketable, (B) Sells Out screenings, (C) Makes Money,  (D) most important, has “Buzz”…. so you may get some cash (E) to pay back your investors and (F) launch your career.

(A) MARKETABLE: You’re accepted to Sundance, Toronto or Cannes. This is marketable. Guarantee your distributor will promote your film as an “Official Sundance Entrant” (always wondered what an Unofficial Sundance Entrant might be). Plus, once you are accepted to a major film festival you utilize their platform and plan a social media campaign targeting your screening to get an audience to purchase tickets… “Distributors (Acquisition Executives) will see this campaign” and see that “it works”.

(C) MAKES MONEY: This is a simple repeat of Marketable & Sells Out… The Acquisition Execs, in attendance, now know that your film “makes money” and their job is to acquire films not that they-like but to acquire films that make-money… And your film has just demonstrated it makes-money.

(D) BUZZ: This is by far the most important point. Why? Distributors know that with an expensive marketing campaign they can get people to come to a theater, buy a ticket, and watch your movie. However, what they cannot control is “what people will say when they leave the theater”. And, when your movie is over, and the Rear Title Crawl credits scroll, if the audience politely applauds and leaves then they (acquisition execs) know that your film is truly not going to be “long-term” marketable. However, when the Rear Title Crawl credits scroll, the audience STANDS UP & SHOUTS APPROVAL yelling “BRAVO, BRAVO, BRAVO…” then you have a hit and there is going to be “Buzz”.

(E) PAY BACK: Independent Film making means you get-your-own-money and it will not be from the film industry… which you are independent of… Thus, it comes from friends, relatives or literally “Quido & Carmen” and now “Quido & Carmen” want-their-money-back.

(F) LAUNCH YOUR CAREER: If you can make a feature film that gets into Sundance, Toronto or Telluride and secures a distribution deal you will be making many more movies (higher budgets, better salaries, profit potentials, etc) and your career is likely launched.

This is called “WORD OF MOUTH” and you cannot buy this type of positive publicity for millions of dollars. Your film is coming with a “BUZZ”  (for whatever reason) then your film is going to get a great offer.

It was a 5-week shoot, signing with only SAG above-the-line on a Low-Budget, Affirmative Action Waver Agreement, with 2 names (tv names) that were paid $50K each.

It is a quality script. A contemporary psychological drama (a 2015 version of “Play Misty For Me”) shot in scenic Carmel, California, with three superb subplots, a triple-twist ending that left the audience standing & applauding as the rear title crawl credits scrolled.

Shot with 2 Red 4K cameras, lit well, audio track flawless, excellent ADR & Foley, with an original music score that is owned 100% by you.

SECOND: Negotiate every single one of them.

Now, lets get to the 7 Offers.

(At Festivals there is no such thing as a “Simple Offer””: There are 32 Points to haggle.)

The distributor (aka: Acquisition Executive) chats budget, tells you how amazing your film is and states “Lets be partners. Lets go “50-50”. The distributor then gives you no money upfront, but states a $2 Million marketing campaign and you will get 50% of Net Producer Profits.

The distributor offers you $2,000,000 for world-rights for ever. It’s a Buyout Deal. The Distributor is buying; you are selling; take the money; walk away and the distributor owns everything…. forever.

The distributor offers no money upfront but will distribute your film in North America (USA/Canada) with 300 prints in 300 theaters, covering the top 25 markets, for a minimum of 3 weeks, with a Distribution Fee of 35% and recoups all expenses, with a Rolling Break-Even Point, and no Binding Arbitration… but you keep all Foreign Rights and, 60-days after the North American release you can go to Cannes, AFM or EFM and license your film to 35 nations or territories and keep 100% of the revenues.

The distributor states your film is great “Gonna do better than “Blair Witch” or “Paranormal Activity”” and is putting up a $10 Million marketing campaign that is almost guaranteed to make you into a celebrity, but you get nothing from this film in profits or participation, but you get a re-make deal for “YOUR MOVIE: Part 2” at a $5 Million Budget with you obtaining a $250,000 Writing Fee and a $750,000 Directing Fee, with a “YOUR MOVIE: Part 3” budgeted at $20 Million but all deal points are contingent on the success of “YOUR MOVIE: Part 2”

The distributor offers you $400,000 upfront (to pay off your investors. Quido & Carmen are happy) and markets the film with a $3 Million campaign but keeps all Theatrical Revenues and Foreign Rights but you keep the ancillary revenue streams (On-Demand, Pay-Per-View, Pay-Cable, DVD (Rental & Sell-Through), TV, Licensing, Merchandising, etc.). However, they have Remake Rights.

They, the distributor, gives you the choice of selecting a Multi-Platform release of either (A) small Theatrical (North America) Release while simultaneously (Day-and-Date) going to the On-Demand platforms of first the Transactional, then the Subscriber, then the Ad Support Platforms or (B) the same small Theatrical Release (North America) with a simultaneous (Day-and-Date) DVD/Blu-Ray Sell Through offering a Target/Walmart/Costco…

There is now a new world. Selling your film is no longer just to the “ticket selling” distributors but, also, to a new revenue stream, the on-demand networks… The Netflixes, Hulus, Apples, Amazons, Facebooks, etc… And each of the streaming networks has an acquisition executive at the major festivals with a bigger checkbook to purchase, but world rights and exclusively for their streaming network… Bottom-line if one of these networks offers you a buyout with a check that is bigger than the check offer a theatrical distributor offered you, with their alleged (yuk-yuk) percentage-of-profit promise and that check is big enough to payoff your investors, payoff your debts, and secure a small profit for you and your investors… I’d probably take it.

I like Deals #2 & #7. For I am always big on take-the-money and-run. Knowing that once they (distributors/networks/aggregators) give you some money upfront for your product they are definitely going to need you for 1-4 weeks for marketing… And it will be this marketing campaign that makes you into a “Hollywood Commodity”… and I’m sure you have heard of “Creative Bookkeeping”.

I vote for, although all the deals have merits, Deal #2 and today Deal #7… (A) Take the Money, (B) pay off your investors, (C) be made into a Name and (D) secure an Agent and capitalize on your Name’s value for Movie #2 and Movie #3 at bigger and bigger budgets.

Start at the bottom, but not with a short, with a feature film.

Now Make-A-Film; Get it Into a Major Festival; Get the Acquisition Execs to attend: and if the audience comes, the screening sells out and the Audience shouts approval… Voilla.

Of course it is not that quick or easy and there is much more practical information to obtain to be a Producer, Writer or Director, even Actor, in today’s global film world and I look forward to giving you that information with either my “2-DAY (Dec 7-8, 2019)” or “STREAMING” (20-Days or 60-Days) Film School programs. 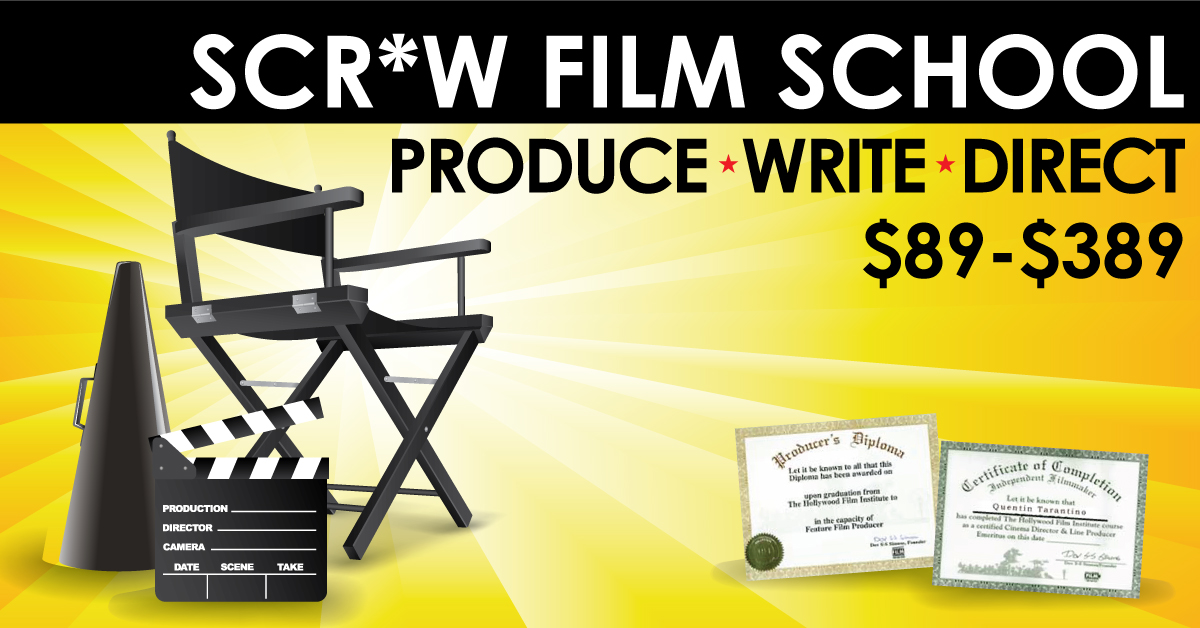