First, a Festival is where you attend, with your finished film, to screen for buyers (aka: Acquisition Executives) for them to see that your film sells out (it is marketable), has a clearly defined demographics (who bought tickets) and that when the Rear Credits roll the audience doesn’t just politely applaud but stands, yells & screams “Bravo, Bravo, Bravo” (word of mouth).

If this occurs and you have achieved getting 12-15 Acquisition Executives into the screening who see that this “Bravo, Bravo, Bravo” just occurred will result in you selling your film, literally in the lobby of the theater, within 1-2 hours of the screening.

(“Cannes Festival is May, Toronto is October, Sundance is January… If you can get into either of these and get 12-15 Acquisition Executives to attend your premiere… You are now a Hollywood celebrity.”)

Film Festivals are social events about parties, contacts and awards… But there is something under the surface going on about demonstrating that your film will sell tickets and likely profit (this is business… there are no guarantees), has positive word of mouth, is marketable and what demographic buys tickets.

Film Markets, however, are exactly what the word “market” states… There are Buyers and Sellers with very few viewers.

A Film Market, not a Film Festival, is where you go when you want to secure financing (aka: Pre-Sell) for your script to be made into a movie.

Cannes is both a Film Festival and a Film Market and it is taking place this month.

Cannes is definitely the top festival, with Sundance a close second, that you desire to attend to be able to sell your film while also (Film Market: aka Marche) being able to finance your next film.

For your own personal knowledge here are 5 films at this year’s Cannes that are sure to sell and you should follow the process.

This year is post-Weinstein and everyone knows that the new Streaming Tech Companies, titled “FAANG” (Facebook, Amazon, Apple, Netflix & Google), are the biggest check writers but who are the other players (aka: Deal Makers, Power Brokers), with fat check books for packaging, that you know as Producers and are always being written about in the trades?

(“Movie Movie is easy to come by if you can get one of the (see below) 25 Deal Makers or Power Brokers at Cannes to read your script. Target the 25”)

Here are the top 25 Producers, Movie Packagers, Dealmmakers, Power Brokers and/or Film Financiers that you want to meet and partner with.

However, I bet the one thing in common you notice is that there’s a good chance that the Power Broker or Deal Maker’s parent is a Billionaire or they made Billions in the Tech world.

Enjoy the list. Google their names. Find their contact details. Write the great script. Register & Copyright it… Now come up with some unique way to get it to one of the 25 below… And if script coverage is good… you got money.

(4) MEGAN ELLISON: CEO “Annapurna Pictures” (Father owns Oracle, which is worth multi-billions, she can do whatever she wants)

(“Cannes has now instituted the Weinstein rule… Must be at least 3 people per hotel room meeting.”)

(5) DAVID FENKEL: Co-Founder “A24” (Made “Moonlight”, “Lady Bird” and “The Florida Project” might be bought by Apple)

(17) PIERRE OMIDYAR: Co-Founder “First Look Media” (eBay founder is Billionaire and can do what he wants)

(21) TEDDY SCHWARZMAN: CEO, “Black Bear Pictures” (Son of Blackstone Billionaire, another child who can do what he wants)

The above 25 will spend about $1 Billion to fund, non-studio, independent films next year… Why not yours. 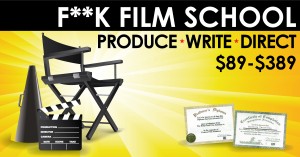 Then pick one of my film programs.