Make a feature film but get realistic.

By realistic I mean, when Hollywood (6 studios) states that the average low-budget movie budget is $15-20M, stop naively thinking that if you say “My budget is only $3-5 mill, or $2-3 mill or $1-2 mill or even “just-under” (love that phrase “just-under”) $1 mill” that makes it impossible for anyone to say “No” to you.

Now, I’m posting, assuming you have $20-30K, how to Write, Produce, Direct & Shoot your first feature film and focusing on a 1-Week Shoot.

ANSWER: Because once you stop talking like low-budget (Yes, I’m repeating but it is important… so I will repeat) is only $1-2, $2-3 or $3-5 Million, and fantasizing that the studio system will finance you because you have an idea and realize that $20-30K is a lot of money you might actually produce your first project.

ANSWER: Because neither you, nor your parents, are wealthy and $20-30K is still very hard to achieve.

Thus $20,000 to $30,000 is what you, a first-timer, will realistically (just my opine) have access to, to demonstrate your talent, by making a movie that profits. 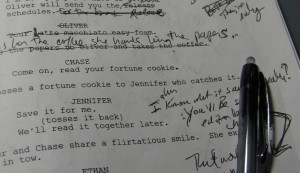 (“For a No-Budget Film to gain recognition it is almost 100% dependent on the script.”)

FYI: Yes, you can shoot with BlackMagic, GoPro, or DSL cameras or even use to iPhones or Samsungs that are now 4K but there is just something about having a Red on the set which makes your cast & crew think “It’s a real movie” rather than a “nice student film”.

Thus, the production is a 1-Week (7-day) Shoot and, if over 2 weekends, it becomes a 9-Day Shoot, with a 90-Page Script and a Shooting Schedule of 10 Pages/Day.

Assuming 24 hours in a day, with 12 hours of daylight, your minimal crew & actors arrive at set (aka: Call Time) and commence shooting at about 1-hour after daylight. Then allowing 1-hour for a lunch break, this leaves only 10-hours of Daylight for directing the 10 pages each day.

Thus your daily shoot schedule is 1-Page/hour and with this minimal time, you light with one Key and two Backs, with the coverage (the shots directed) being 80% Masters, 10% Mediums, 5% Closeups and 5% Establishing Shots.

Of the 5-7 paid crew be sure to have a qualified Cinematographer/DP (Director of Photography), who might even own two 4K camera packages (Red is heaven), with an assistant to operate the 2nd camera who is called a “Shooter”. Also, be sure to hire a qualified Sound man (The DP knows many), with his/her own equipment, who comes with an assistant called a Boom Man or Mike Man along with a Production Designer.

For DP, with Camera package, allocate $1,700 for 1 week. (If DP has no credits on a feature film as DP but numerous credits as Camera Operator he/she will take the gig to literally acquire his/her 1st Feature Film DP Credit)

(“When hiring crew for a No-Budget shoot never forget how important the soundman is.“)

For Sound man, with equipment, allocate $1,250 for 1 week. (The Soundman will do the shoot at minimal wage only if he/she knows the DP, who gets him/her jobs, and has no work next week… as a favor for the DP.)

Please spend as much time with the sound man as you do with actors, writers, investors and cinematographer…. P-l-e-a-s-e.

Want to launch your film career?

Then my no-bull film program is perfect…