You’re a first-timer and want to be a director. You have so many great film ideas but are totally stumped with how to be accepted by this Hollywood maze and be allowed to direct.

You’ve done the first-step. You’ve written the scripts. They’re done with Final Draft 10.0 and regsieterd with the WGA. You are sure will launch your career but must make sure your idea-story-scripts are not dumbed-down or bastardized and the only way to ensure that, or so you’ve been told, is you and only you must direct.

(“Clint is a genius director who knows speed and efficiency. He first gets a Master, then goes in for 2 Mediums and doesn’t allow more than 2 takes.”)

So you’re gonna direct, you’re gonna control your destiny, but dang-darn no one seems to tell you what to do, where to start and how to succeed.  And it seems that these sweet talkin’ directors keep the real information close to their chest while dispensing romantic vagarities like “You have to involve the viewer”, “Allow the actors the freedom to act”, “Make sure to think visual”, “You need passion”, “Important to have an excellent supporting crew”, “Hire the best”, “Stay true to the story”…. “Yadda-Yadda-Yadda.”

Why? Because I was where you are when I first came to Hollywood in 1982 with a plethora of great ideas, a couple of book options, and two poorly (didn’t know that at the time) written screenplays and was stumbling from networking to networking event, looking for a mentor, just wanting some simple mechanics of how to start my directing career.

Yes I had hunger… and all I needed were some simple nuts-and-bolts.

I took numerous night classes at UCLA Extension and USC Adult Ed from the pros, at $495-$695 each, who in their heart believed they were giving back, but in reality, although successful directors weren’t excellent instructors and unwitting perpetuated romance and naivity with the cute casting stories they voiced.

Then permit me to save you 3-4 years bouncing around Hollywood, BH, Santa Monica & Malibu, while driving Uber, with a script under your seat (never know who you’ll pick up, especially Sunday morning at 3 am) or being a Starbuck’s Barista at the San Vicente Blvd’ Starbucks in Westwood, in hopes that a famous director or producer (Spielberg & Hanks get their Cappuccino’s there) take you on as mentor, as you show them the secret to twirling foam, and dispense the 3-4 pearls of wisdom that unlocks Hollywood’s door to directing.

Let me be ruthlessly honest… There are no mentors.

That is mentors, who don’t want you to work for free (“Free, Yuk”), but mentors who tell you A, B, C & D as in… first do A, then do B, but be careful about B, if you want to do C, so to be able to do A with C, on so-and-so budget, you must make sure that B gets done in so-and-so time… but do not forget about D and to get A, B & C, while allotting enough time and money to get D you must be sure to…Yadda-Yadda-Yadda.

Now that is a mentor and I believe that is the type of directing information or mentoring is what you desire and allow me to give a minutia of it (Shot Selection) to you with the below A, B, C & D, or 1, 2, 3 & 4, Directing Nuts-and-Bolts.

Directing (see above #s 1-7) the Script (2) and Direct the Actors (3) has no real nuts-and-bolts. It truly is the art of directing and can not be taught. It is just something that you must, with trial-and-error, learn your way on what you can do and what you cannot do.

Your first feature, will likely be low-budget, based off of a 90-page, 1-location script, with only enough money to execute, at the most, a 3-Week Shoot.

18 Shooting Days with a 90-Page Script is a Shooting Schedule of 5 Pages/Day.

Each day has approx 12 hours of daylight, minus 1-hour for morning’s first setup and 1 hour for lunch, leaves you with 10 hours of shooting time.

With 10 Hours you must Direct 5 Pages or get 1 Page (1-minute of running time) of Script covered (aka: shot) every 2 hours.

With 5-6 shots making 1 scene or possibly 1 page and having a Shooting Schdule of 5 Pages/Day has you directing 25-30 shots (aka: setups) every 10 hours.

Get it. No more theory. No more Romance. No more Passion. You have a budget, a time schedule, that makes you get 1-shot in-the-can every 20-24 minutes.

Make your mind think in this order when directing.

Thus, commence each scene with a Master Shot (15-30mm Lens).

After you get a good Master (no more than two takes like Eastwood) go on to the two Over-The-Shoulder (aka: OTS) Medium Shots (30-50mm lens) that are Reverse Angled.

After you have a good Master and 2 OTS Mediums, approx 50-60 minutes of the 120-minutes allocated is used, for the remaining 60-70 minutes go for the Closeups.

When thinking Closeups (50-75mm Lens) first get your 6 close-ups (aka: Reaction Shots, Cutaways) of backdrop actors, for 3-5 seconds each, reacting to the primary actors acting.

Now go in for the Closeups (50-75mm Lens) of the primary actors acting for the entire 60-second (1-page) scene.

This is basic coverage but do not leave the area without getting a 10-20 second Establishing Shot (Valley, Town, Street, Building, etc.) of the entire scene’s vicinity.

First get the Master… then Mediums… then Closeups… then Establishing Shot…

Now do it uniquely different.

Uniquely different is another phrase for Talent which I do not know how to teach… But at least you now have some nuts-and-bolts.

Below are 10 highly rated articles, written/blogged by pros, with sights like Variety, IndieSlate, HuffPost who dispense a lot of directing theory.

Enjoy the articles and if frustrated go back to the Nuts-and-Bolts of basic coverage and plan 1 Master Shot, then 2 Medium Shots, then 4 Closeups, then 6 Cutaways and before you leave the location be sure to get 1 Establishing Shot. 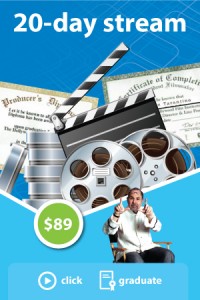 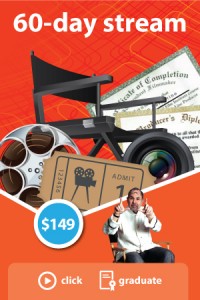 Want facts, Not theory? Then my Film Schools (2-Day, DVD, VOD) are perfect for you.

Pick One. Launch Your Career