Filmmaking… Producing, Writing & Directing has just changed (morphed) 100%. It is a revolution…Are you ready? Are you the filmmaker entrepreneur that will be the first to jump on it… in the Independent Film World?

Huh? Why? What has happened?

Oculus Rift is a headset, that once placed on your head permits you to view a movie in VR (Virtual Reality) which means you, the viewer, are actually in the midst of the scene.   You are in the middle of “Charge of the Light Brigade”, or you are actually sitting in the jurors box at the “Nuremberg Trials”, or on a Thai Beach surrounded by 15-20 bouncing booby “Perfect 10s”…

And who is going to be the first “No-Budget”, “Micro-Budget” Filmmaker to take the creative leap.

IT STARTS WITH OCULUS

Oculus (Kickstarter funded, see below) is not the first headset to allow VR (Sony has, Samsung has….) but it is supposedly by far the best… So good that after it’s first demonstration Mr Facebook (Zuckerberg) wrote a Billion Dollar+ check and said “I wants it”.

The Director no longer dictates where you look. Once the scene is captured with a Master Shot you, the viewer, can choose to look to the left, look to the right and I even imagine, turnaround and see what the actors behind you are doing.

Oops I don’t want to get ahead of myself. And try and put everything into one blog.

During the next month I will post several blogs on the (A) equipment to use, (B) scripts to write or stories to tell, (C) tricks on capturing audio in 360 degree mode and (D) how to get actors to act 360.

In the interim below is a superb article written by RAINDANCE (www.Raindance.org) , a film co-op and superb alternative film school in London, that has fostered a majority of the English independent film careers over the past 2 decades.

Search around a little bit for biggest expected trends in technology for 2016, and you’re almost certain to stumble on a few headlines about virtual reality. Indeed, a number of major tech companies are on the verge of rolling out virtual reality headsets in a big way, and the result could be a pretty significant shift in how we go about home entertainment. Most of the early implications, however, involve the gaming industry. 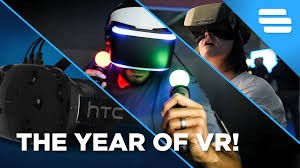 Some even equate the very term “virtual reality” with video games, given that the expectation of a VR environment is to immerse yourself in a fiction, and thus take part in it. This implies taking an active role in the fiction, and so we think first of video games. And this is where much of the early excitement regarding in-home virtual reality lies, particularly given that there have been numerous exciting games announced and, in some cases, publicly demonstrated. Wareable compiled a list last year of different VR games “set to blow your mind” in the next 12 months, and it included some exciting looks at various adventures, puzzles, and even adaptations of older titles (such as Minecraft) coming to VR consoles.

Additionally, there are existing types of video games that would seem primed for quick and effortless adaptation to VR formats. The first games that come to mind are those in the racing genre, where the first-person point of view is already offered in a number of the top games. Sure enough, the aforementioned article about upcoming games points out a title called “Assetto Corsa” being made for Oculus Rift. On a simpler level, the casino genre, which caters to tens of millions of players online, has also made strides toward approximating VR environments. According to Gala Casino, they have adopted the use of live casino options to allow players to react to and interact with human dealers via video feed to provide a more personal touch. And when this concept is considered in VR terms, it’s easy to see how it could seamlessly create a simulation of sitting at a real casino table.

But even with all of these headlines for VR gaming—some confirmed and some rumoured—a lot of the excitement related to virtual reality also has to do with the film industry, where the whole concept has equally disruptive potential. As VR Circle describes it, watching a film in VR allows you to watch a cinema size screen in your living room, and “if the movie is 360 degree, you can literally step into the movie and be part of it.” That still feels like a pretty sensational concept, but the technology is there and it will be fascinating to see what film studios decide to do about it.

Just recently, we’ve gotten the first major indication that mainstream film in VR could actually be explored in the near future. An article at Paste notes that hit 2015 film The Martian has been adapted into a 20- to 30-minute VR experience that will debut at CES 2016. Rather than simply a film that can be enjoyed via VR, this sounds more like a game spinoff. Users will be in a position to complete tasks the way Mark Watney (Matt Damon) does in the actual movie. Still, it’s a pretty significant milestone in cinematic involvement with virtual reality.

Looking a little further, The Wrap recently discussed the fact that film studios of all sizes are well into exploring the potential of VR and figuring out where to invest and how to craft films for the new form of entertainment. The article theorises that it will likely be indie filmmakers who first master the format, but that this would likely open the floodgates to larger studios roping in the indie capabilities with big Hollywood budgets.

Realistically, it will probably be a while before VR film becomes a sizable means of watching movies. But with the headsets emerging in 2016 and gaming development well underway, we’d all do well to remember that VR isn’t limited only to gaming. The film industry will hop on board as well.

BACK TO DOV & NO-BULL

Now, after reading the above article I’m sure you are titillated with what to do…

Got you mind going… Got your creative juices in gear… OK. Then think practically and…

(3) HEADSET (which to get, compatibility)

That’s enough for now…stay tuned… VR Filmmaking is not a single blog.