For a first-time filmmaker (aka: aspiring director), with a script and a little bit of cash (Micro- or No-Budget), unquestionably the most important person you hire will always be the Cinematographer.

But please hire a Cinematographer who is a DP. Not someone who merely bought 2 cameras and has a business card stating “DP”.

DP? Yes, Cinematographers are now called DPs, or DOPs, or Directors Of Photography.

Simple. 25+ years ago Cinematographers got pissed at Directors.

The Directors Guild instantly realized that they did not know how to make a feature film without the Cinematographers… and capitulated by agreeing that from now on, with respect to Opening Title Credits, the Cinematographers could now put the word DIRECTOR into their title and now be called DIRECTOR OF PHOTOGRAPHY.

THE DIRECTOR OF PHOTOGRAPHY (aka: DP)

Once again: If you want to make your first feature, then without a question the most important person you hire is not (A) going to be the Director (which is probably yourself), (B) not the Line Producer (former Production Manager with a little bit of an attitude), not the (C) Production Designer (who really makes everything look right), not the (D) Editor (the person that really puts the puzzle together) but the “DP”.

(POINT #1: Directors like Photo Ops of them pointing by a camera)

The DP is the MOST IMPORTANT person you hire….for only the DP (aka: Cinematographer) knows truly how to mechanically make a feature film, what camera to use and why, what lens to use and when, what shot to get and where, what coverage to get, etc…

The DP is super important.

Thus please doe not hire someone who is merely 1-2 years out of a 4-year theory laden film program with little-to-no experience but tons of romantic theory..

Do not hire a DP who is an AC “saying he is a DP” and absolutely DO NOT hire some kid out of, again, those ridiculous 2-4 year film programs even if he/she has a degree in Cinematography.

First off a “DP” is an abbreviation for a “Director of Photography”, sometimes called a “D-O-P” or the “Cinematographer” and a camera-crew, has 3-4 more people attached.

The 4 people of a camera crew are….

Now, who’s who and what’s the pecking order?

When someone graduates a 2-4 year $100,000 film school and desires to be a Cinematographer (aka: DP or DOP) they move to NY or LA (people don’t move to Chicago) and get their first job ($250-$300/week) at a camera rental facility sweeping up, inventorying and driving replacement parts out to shoots.

(POINT #2: Repeat Point #1, “Directors like Photo Ops of them pointing next to a camera)

He/she does this for about 2 years and learns all about professional cameras.

Now, at the camera rental facility everyday the real DPs come in to pick up their 35MM/4K camera packages, for the next shoot, to test.

This kid, the driver-janitor of the facility, goes up to the DP and says “Hi. I love your work. If you ever need an AC I’d love to be your “AC”… Then the kid gives the DP a business card that states “AC”.

Eventually a true DP, for whatever reason, needs someone to load the magazines and handle the paperwork for his next shoot and calls the kid offering him/her a job as his “2nd AC”.

The kid, ecstatically, leaves the camera rental facility, takes a pay cut for this temporary job, marries up with the DP as a 2nd AC and works…when the DP gets jobs.

20 Shoots Later: The kid does the “2nd AC” gig for 2 years and, if he/she doesn’t screw up, moves up the ladder and gets a gig as a “1st AC”…which means he/she now “pulls focus” and is in charge of making sure that every one of the DPs shots are sharp & clear.

20 Shoots Later: The kid does this gig for another 2 years, and if he/she doesn’t f*ck-up on any shots, moves up the ladder and gets the opportunity to actually operate a camera and becomes a “Camera Operator”. That’s the person is behind the camera, face smashed into the eye-piece making sure that all of the DPs shots are framed (aka: composed) properly.

He/she does this gig for another 2 years.

Now, this kid, probably no longer a kid, has been over 6 years on 60 shoots, has loaded cameras, worked with lab paperwork, has pulled focus and has composed shots…

…This is the person, who is still only 28-34 years old, young & energetic, that I want you to hire as your DP. 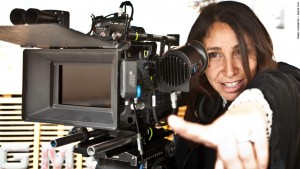 (POINT #3: Repeat Points #1 & #2. Directors like Photo Ops of them next to a camera and pointing)

Only hire someone to be your DP if he/she has been shooting for at least 6 years and been on 60 shoots.

Now you understand…“Hire a DP who is a DP”.

Do not hire a kid fresh out of film school.

Do not hire someone, with a business card, who says they’re a DP.

Do not hire someone simply because he/she owns 2 cameras.

HOW TO FIND A DP

Now, you, the first-time director, will have a seasoned DP, who is a DP, and knows how to Direct-The-Camera and get good coverage (Master Shot, Medium Shot, Close-up, etc) freeing you to focus on casting, scouting, design and rehearsal.

(Our Live, DVD or Streaming Film Schools are all “100% Guaranteed”…No-Theory. No-Bull…)